This the original English version of the interview I conducted with Cathy from Demarcation Design. A German translation is available here.

A note on where this is published: Ich kann nicht mehr leben ohne is a blog I write together with two friends: Ursel Braun and Cerstin Henning. It is a blog about life, women, fashion, travel, good things and bad things — and anything and everything we can no longer live without (that is what the blog name means).

Brexit, the lies and the hate that are its foundation, have already had a high price. The consequences for EU citizens in the UK, and Britons who live in another EU country, are significant. But there is hope. The majority of Britons do not want Brexit. Young people do not want Brexit. London, Scotland, and Northern Ireland do not want Brexit. For the sake of democracy too there has to be a way to make an informed decision on the actual deal, with an option to remain included. #PeoplesVoteMarch, which took place in London last Saturday, was a significant step forward to achieving that. Half a million people marched on the streets of London. They had come from all parts of the UK, many Britons had even made their way to the city from another EU country.

As is to be expected at anti-Brexit protests, many EU flags could be seen, and anti-Brexit posters were everywhere. But clothing also plays an important part at such protests. And that’s what I talked about with Cathy from Demarcation Design, the woman behind the Stop Brexit t-shirts. That’s also how I got to know Cathy, but we really started talking as a result of #WomenAgainstBrexit. Of course there have long since been many women taking a stand against Brexit, but this has become more coordinated recently. When I got a particularly nasty bit of abuse after a #WomenAgainstBrexit event it became clear that a real protest statement would be good to disable the hate. And that’s how we got to the designs of anti-Brexit t-shirts specifically for women, including my Rosie the Riveter shirt. 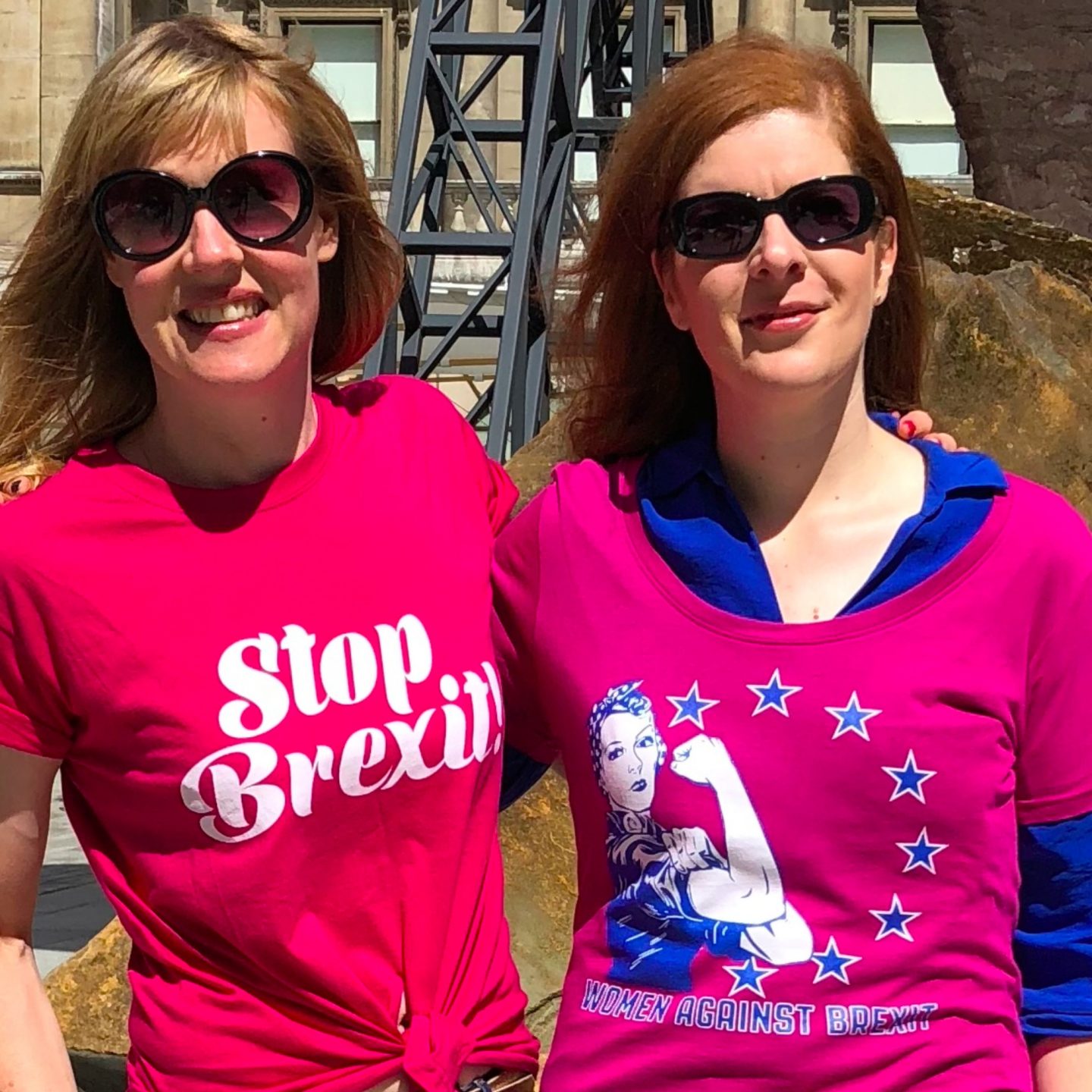 Tanja: Cathy, you are one of the #WomenAgainstBrexit. Why are you fighting Brexit?

Cathy: I’m fighting Brexit for many reasons. When the referendum happened I was living in Budapest, where my second child was born. I couldn’t believe that people had willingly voted to make their (our) lives more insular, more closed, and less rich – metaphorically and economically. I’m British, but I’m also unquestioningly European: it’s part of my identity and who I am. I share what I feel are very European values of tolerance, inclusivity, diversity, solidarity and an openness to the world and new people, and I think if people had actually known the damage Brexit will bring to Britain – if people actually knew what it was that they were really voting for – that the vote would have gone the other way.

Tanja: Yes, I think so too. The Leave campaign was really just based on lies and hate – and, as we now know – a good few manipulations.

Cathy: Indeed. I also appreciate the wonderful opportunities presented by Freedom of Movement. Some of my best friends are originally from other European countries and have chosen to make Britain their home, and the idea of shutting them out and excluding ourselves from this amazing chance to live and work elsewhere is incomprehensible to me. My extended family all live in New Zealand and all wish they had British passports so they could travel more freely and live in other countries without the hassle of applying for visas etc. We don’t appreciate how much other people envy the freedom being part of Europe brings us. I’d like my kids to be able to enjoy the same opportunities and economic security being part of the EU has given my generation – and I don’t want to have to look them in the eye in 10 years time and tell them I did nothing while their rights were stripped away.

Tanja: I think that motivates many. Is that why you started designing t-shirts with anti-Brexit slogans?

Cathy: The t-shirts started as a personal protest and spiralled from there. In the summer of 2017 I was feeling so fed up with the political situation that I decided I needed a big slogan tee with „Stop Brexit“ written on it. I looked everywhere but couldn’t find any, so I knocked up about 10 designs, had them printed and started wearing them everywhere to make myself feel better. I got comments wherever I wore them – from the postman, from my mum’s neighbours, on the tube, in Europe. And I realised that making that kind of statement in daily life had a powerful impact. It’s *daily* resistance – i.e. not just waiting for a protest to spread the Stop Brexit message. I wear my tees to the supermarket, on holiday, on the school run, to the beach, you name it, I’ve protested there. Without fail someone somewhere will raise Brexit and come up for a chat. I hope protesting in this way spreads the word that Brexit isn’t inevitable, and encourages other people to start resisting as well.

Tanja: So what role does clothing play as a protest statement?

Cathy: Politically inspired clothing has a long history – from the suffragettes wearing purple, through to Katherine Hammnett political tees in the 1980s raising awareness of AIDS. It’s a gentle form of subversion, it’s empowering, and it makes me feel better. I oppose what is happening to our country, and I want the world to know it. 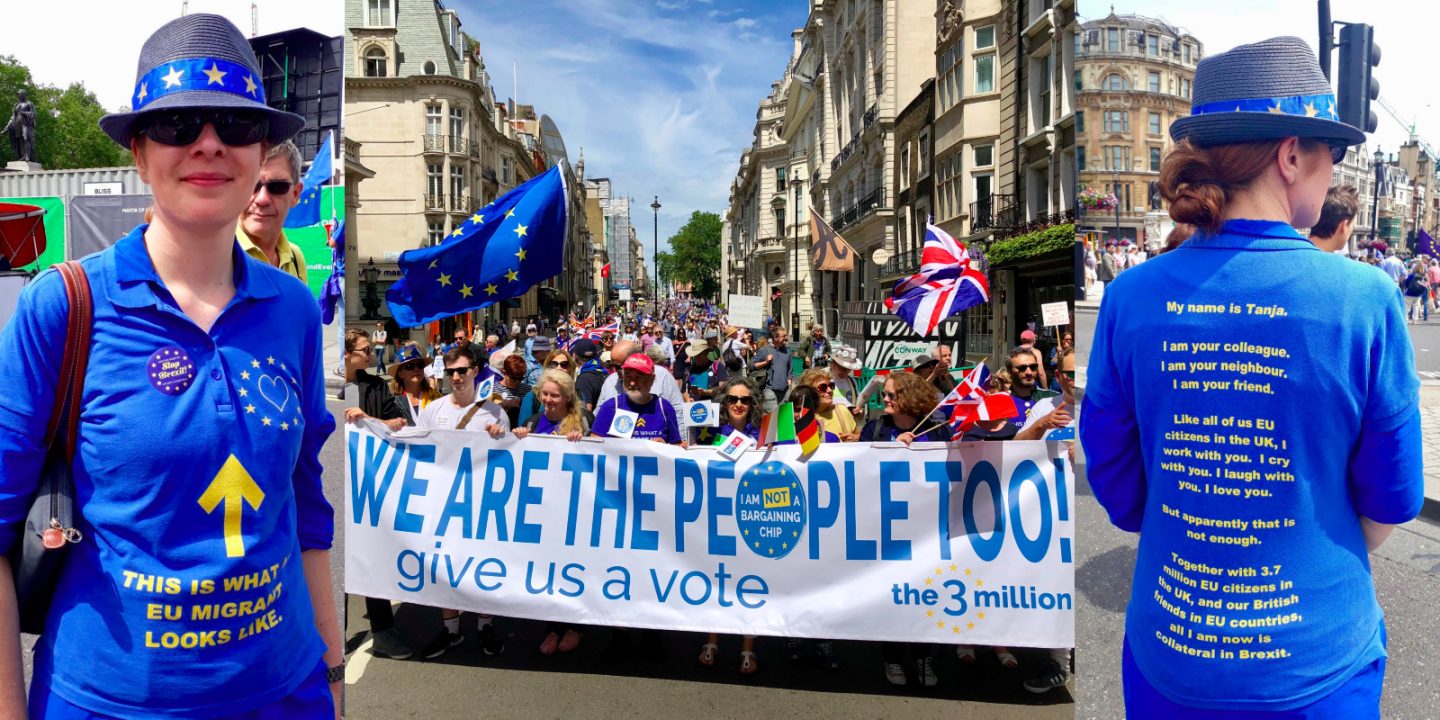 Tanja: Show the world, yes! That’s how many Britons who voted Remain currently make a statement too: with their passport cover – „Don’t blame me, I voted Remain“! But yes, I am also keen for the world to know. Brexit is personal and that’s also why, on Saturday, I of course had to march as an EU citizen. My t-shirt was the protest poster at the same time.

Cathy: Also very visible! For me, as a woman and as a feminist, I am not going to be told what I can and can’t wear, although you can tell that sometimes people are really when they see what I’m wearing. Luckily I’m fairly immune now to dirty looks or the occasional „We’re Leaving!!“ shouted as I walk by. It’s a big, uncompromising political statement – and it enables you to start conversations (and hopefully change a few minds along the way). Sometimes it’s uncomfortable, but generally most of the comments I get are supportive.

Tanja: That’s not always the case for me. Just think of Saturday: there I was, holding your #WomenAgainstBrexit sign for a moment, there was photo … and because that ended up in a Twitter Moment, half of Brexiter-Twitter was suddenly talking about my apparently non-existent breasts. Oh la la … Female and fighting Brexit – the Brexit hardliners, mostly male, don’t like it. A good transition to my last question: it’s not easy to oppose Brexit. What inspires you? Why are you continuing?

Cathy: I’m motivated by so many of the other amazing women I’ve met through getting involved in the campaign. I’m motivated by wanting to stop what I feel is a huge injustice. And I’m learning so much, every day, from so many others who give and do so much more than me. Some days I need to switch off and step back from it all, and I think recharging occasionally is important; but I feel like we’re on the right side of history, and whatever happens, at least I’ve tried, and played a tiny part in hopefully preventing something which I think will be hugely damaging for us all.

Tanja: Thanks very much for talking to me, Cathy. Those who are keen to learn more, Cathy’s Webseite is Demarcation Design, and her Twitter handle is @DemarcationDSGN. 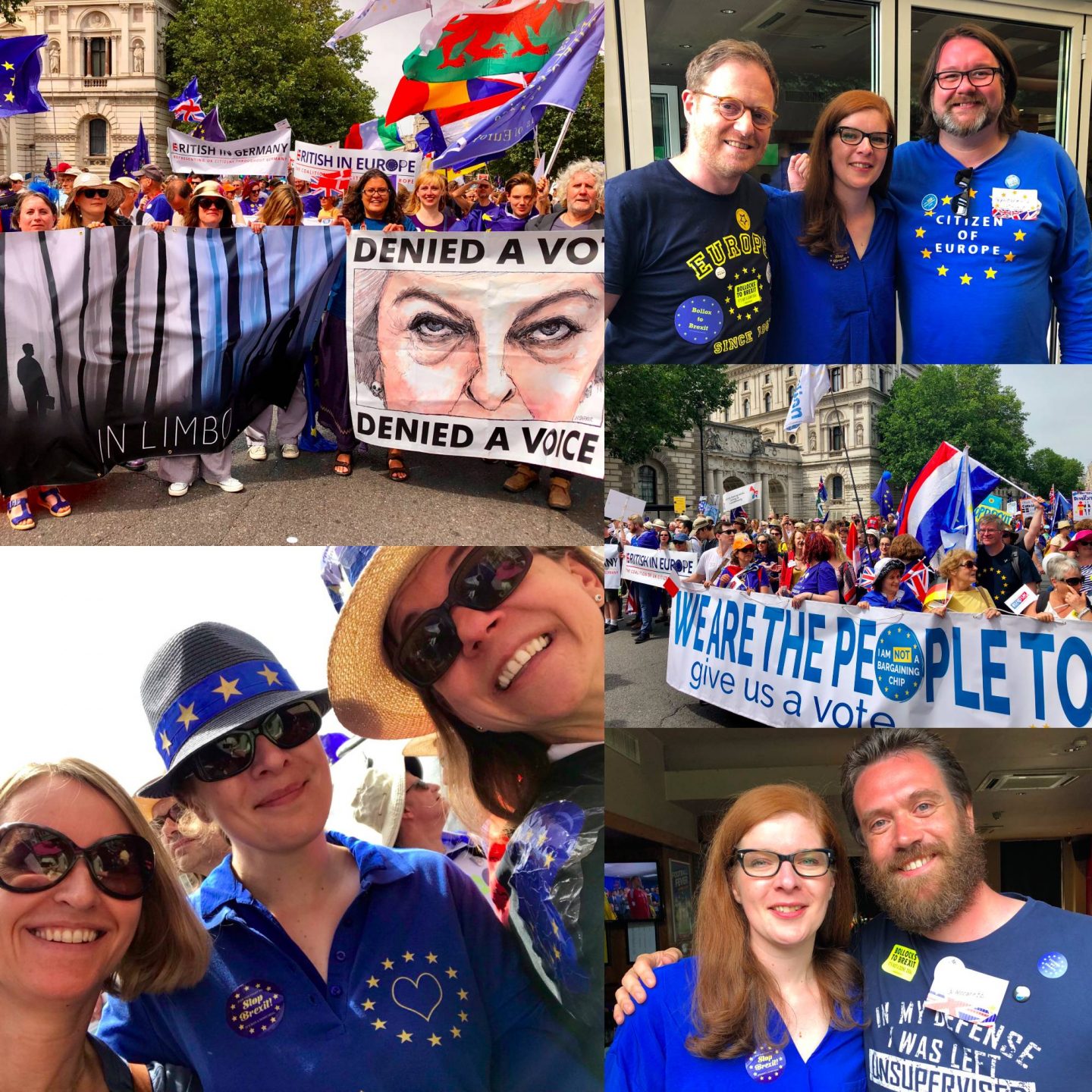 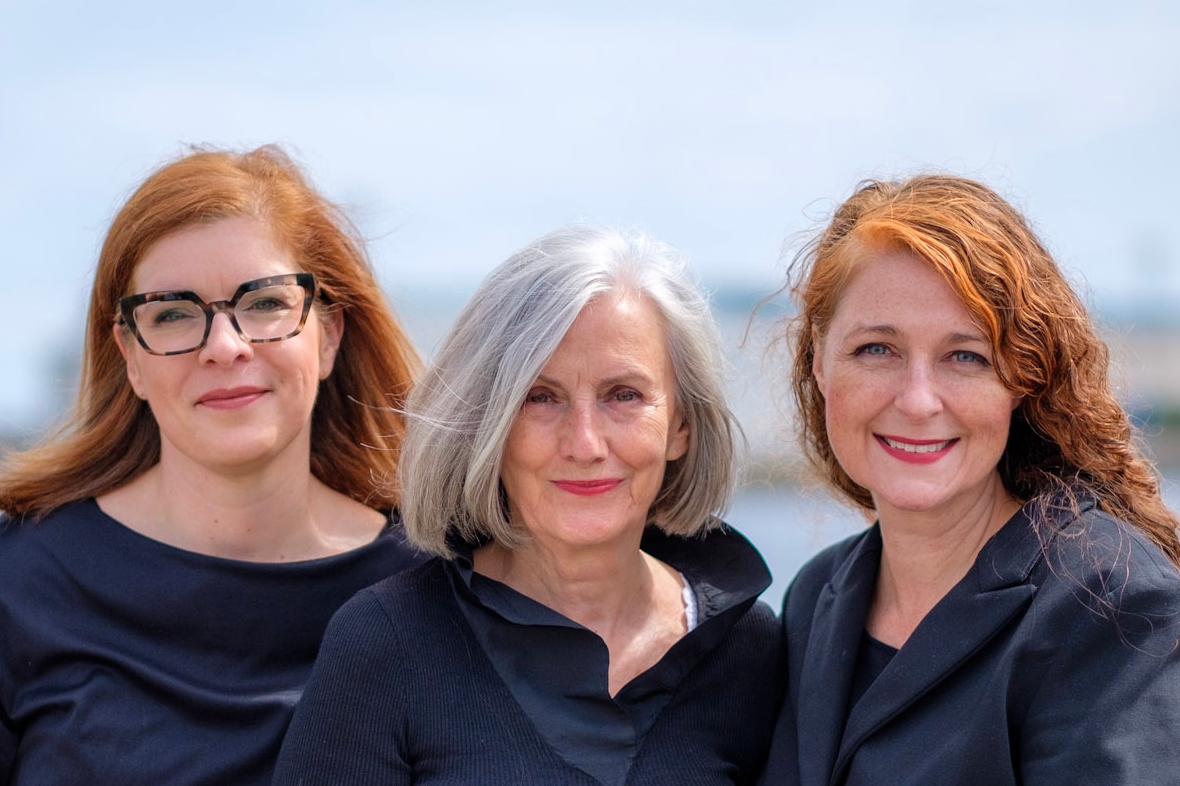